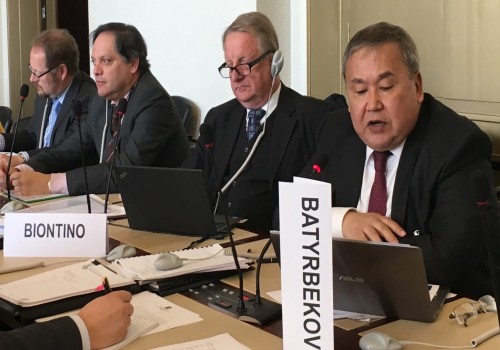 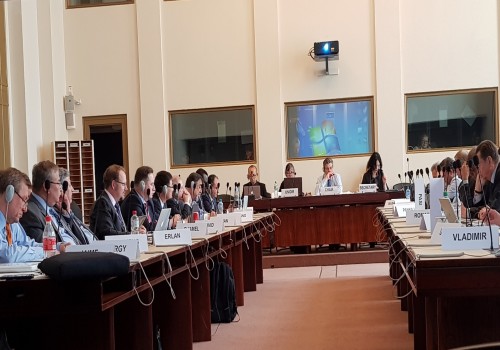 On May 14, 2018 Group of Governmental Experts started the first session work on role of verification in advancing nuclear disarmament in headquarters of UN, Geneva. The Group was established upon the resolution of 71/76 UN General Assembly involving 25 experts – advisors of UN Secretary General selected from different countries. E.G. Batyrbekov, Director General of RSE NNC RK is involved in Group of Governmental Experts on behalf of Kazakhstan.

On the first day Group of Governmental Experts presented their opinions on development and enhancement of practical and efficient measures on nuclear disarmament verification and importance of such measures in achieving and maintenance of the nuclear weapon free world.

E.G. Batyrbekov noted in his speech, that efficiency of the nuclear weapon elimination process directly depends on the fact if this process is really integral. Nuclear weapon abandonment shall become the universal internal need that would promote pursuing common purpose – a complete nuclear disarmament. To do so it is necessary to enhance confidence as a reasonable alternative to military concepts of deterrence. In this context Kazakhstan’s experience is remarkable since for the short period of time the State managed to turn from the holder of the world’s fourth nuclear arsenal to the State-leader in global non-proliferation by closing the Semipalatinsk Test Site and abandoning nuclear weapons completely.

During the report it was noted, that one of the key elements in disarmament process is the efficient verification without which it would be hard to achieve absolute confidence in compliance with strict nuclear disarmament obligations. Nuclear disarmament verification is important, but at the same time challenging task to be addressed due to set of problems such as compliance with the access prohibition to proliferation of sensitive information concerning non-nuclear weapons states with their active participation in the verification implementation. In this regard, the experience of the Republic of Kazakhstan, as state with a nuclear-free status actively cooperating with nuclear weapons states in elimination of nuclear weapon tests infrastructure is noteworthy. E.G.Batyrbekov urged experts to turn to this experience building the most effective verification system of multilateral nuclear disarmament.

During the next days of GGE First Session, it is planning to consider the experience of Comprehensive Nuclear-Test-Ban Treaty Organization, Organization for the Prohibition of Chemical Weapons, International Initiatives, to share the views on the applicability of certain approaches to the verification of nuclear weapons, to discuss the key problems of such verification realization.