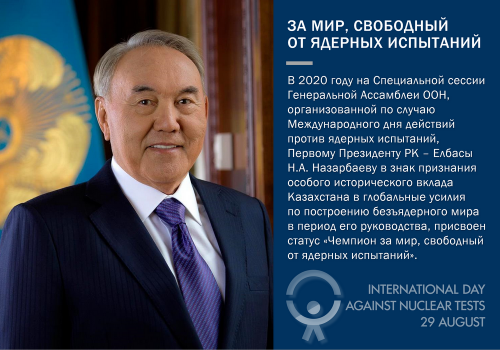 The First President of RK – Elbasy N.A. Nazarbayev has received the status as a “Champion for a World Free of Nuclear Tests” in recognition of his special historical contribution to the global efforts in achieving a nuclear-weapon-free world. It was announced during Special Session of the UN General Assembly, held to mark the International Day against Nuclear Tests. The award is the result of active anti-nuclear policy of Nursultan Abishevich, based on his wise decision made on closure of Semipalatinsk Test Site.

The decision to close one of three world’s largest test sites was one of the first political decisions made by the Leader of Nation, that became a bright example of political will demonstration, based on the aspiration of the entire Kazakh people towards nuclear-weapon-free world.

Today, we also witness with satisfaction – the territory of the former Semipalatinsk Test Site has been fully cleared from consequences of USSR military-industrial complex nuclear activity and brought to safe conditions. Measures taken by the leadership of the Republic of Kazakhstan on nuclear weapon non-proliferation have completely excluded the threat that the uncontrolled collapse of once-powerful Soviet nuclear weapon complex could have created for the system of international relations. Currently, comprehensive radioecological studies have been carrying out within the STS territory, that are planned to be completed by the 30th Anniversary of Independence of the Republic of Kazakhstan. A large quantity of information has been received, there is a clear notion on STS problems and further perspectives on its use for peaceful purposes.

Realization of a complex of scientific-technical and engineering operations to bring the former Semipalatinsk Test Site to safe conditions is an unprecedented example of effective efforts and specific actions, taken by the Republic of Kazakhstan, aimed at nuclear testing infrastructure elimination.

Due to the results achieved by consistent anti-nuclear policy and peaceful initiatives actively promoted at different levels, our country has consolidated its global leadership in nuclear disarmament, nuclear non-proliferation and nuclear safety, and continues its sequential efficient work aimed at nuclear-weapon-free world achievement.