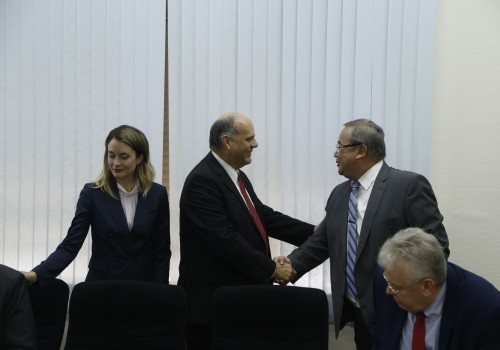 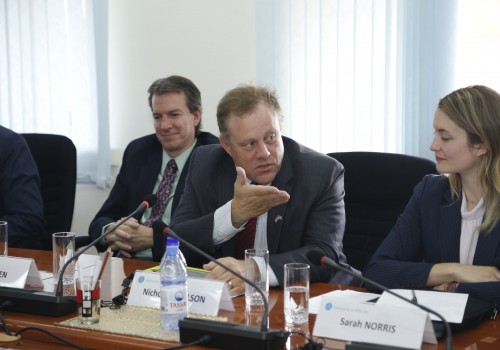 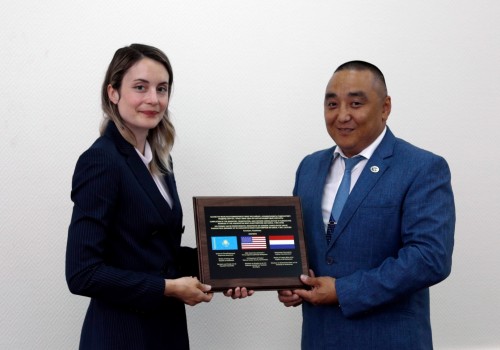 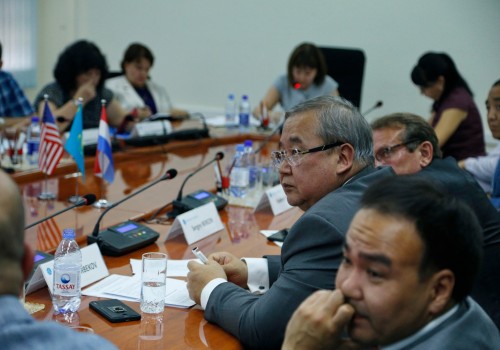 On July 23, 2019 Solemn events were held in the National Nuclear Center of RK dedicated to the completion of two projects under multilateral cooperation in area of safe management and physical security of ionizing radiation sources (IRS) in the Republic of Kazakhstan, namely:

Over the years, RSE NNC RK has been accepting solid radioactive wastes and expired ionizing radiation sources (IRS) to dispose them for the safe long-term storage. Acceptance procedure required the following: extracting IRS out of encasement, identification of the sources in radiation protection chamber, and packaging to protecting casing for further long-term storage at RRC “Baikal-1”.

With the progress of the activities, realized under financial support of the Governments of the Kingdom of the Netherlands and with the participation of the National Nuclear Security Administration of US Department of Energy, over 15 large-size IRS containing pieces, devices and facilities were accepted.

Considerable size and weight of the devices hampered extracting of radiation sources using technology and equipment available in the RSE NNC RK, in particular, due to limited size of radiation protection chamber and loading process windows. Therefore, a decision was made to solve the issue during Joint RK-USA Energy Partnership Commission.

As far back as June 2017, within the framework of Program implementation approved by Joint RK-USA Energy Partnership Commission, STC “Nuclear Technology Safety Center”, National Nuclear Center of RK, “MAEC-Kazatomprom” LLP and “IzotopSnabService” Ltd had signed an agreement on handling large-size radioisotope devices (RID), which contained ionizing radiation sources and were stored at the NNC RK.

-  for the period from July to October 2017, part of RID were disassembled, IRS were extracted and placed for long-term storage at RRC “Baikal-1”.

- for the period from November 2017 to June 2019 final efforts were made for transportation of remaining RID to “MAEC-Kazatomprom”, where the sources were extracted and put to transport containers. Later the disassembled radioisotope devices and transport containers with extracted IRS were transported to the National Nuclear Center of RK. In radiation protection chamber the ionizing radiation sources were taken out of containers, identified and placed for long-term storage at RRC “Baikal-1”.

The project implementation period is 2012-2017. The project objective was to vacate suppression pools of BN-350 reactor facility and dispose RNNM/IRS, accumulated in “MAEC-Kazatomprom” LLP for safe long-term dry storage.

As part of the work under this project, an inventory of RNNM and IRS accumulated in “MAEC-Kazatomptom” LLP was performed and various options for their long-term storage were considered. As the result of the analysis conducted, the option of dry storage in metal - concrete containers at the site of MAEC-Kazatomprom LLP was chosen. In accordance with the developed and approved project, four metal-concrete containers weighing ~ 50 tons each, as well as internal baskets and containers for high-level and low-level IRS were manufactured at Aktau Machine-Building Plant.

MAEK-Kazatomprom LLP specialists unloaded RNNM/IRS from the suppression pools of the BN-350 reactor facility, packed and placed them in metal-concrete containers. After the physical protection upgrading of the site constructed earlier for the temporary storage of spent nuclear fuel of BN-350 RF, metal-concrete containers with RNNM and IRS were placed there. Before the start of handling with radioactive materials, a cold run was carried out in order to check the normal operation of all the systems and equipment involved.

As the result of this work, most of the parts of the suppression pools of BN-350 reactor that is in the decommissioning stage were vacated. All IRS and RNNM accumulated in MAEC-Kazatomprom LLP over the years have been inventoried, consolidated and placed for safe long-term dry storage.

The participants of the solemn ceremony noted the importance and success of the work carried out aimed at supporting the efforts of the Republic of Kazakhstan in the field of ensuring radiological safety.

The outcome of the ceremony was the presentation of the memorial plaques to the project participants by the representatives of the National Nuclear Security Administration of the US Department of Energy.