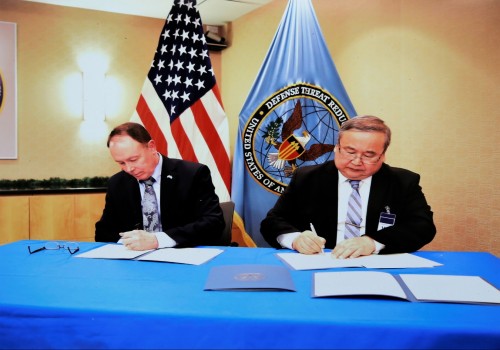 This year we marked the 25th Anniversary of joint work for weapons of mass destruction proliferation prevention realized by the Republic of Kazakhstan and USA under the Cooperative Threat Reduction Program.

During these years an outstanding amount of unique works was implemented to bring the former Semipalatinsk Test site to a safe condition, resulting in reducing the risk of proliferation of weapons of mass destruction and prevention of access to residues of nuclear activity at the territory of the test site.

The results of operations that have been performed and those that are under performance on reducing the risk of WMD proliferation became a subject of discussion at the meetings and during technical tours to the Nevada National Security Site during the visit of the National Nuclear Center of RK to USA.

It was noted at the meeting participated by Mr. V. Oxford, the Director of DTRA, the Ambassador Extraordinary and Plenipotentiary of the Republic of Kazakhstan to USA and Defense Attaché of the Embassy of the Republic of Kazakhstan to USA at DTRA headquarters, that Kazakhstan had demonstrated a positive example of the effective international cooperation in the area of global threat reduction and strengthening the non-proliferation regime.

The visit resulted in signing of the Roles and Responsibilities Protocol document between the Defense Threat Reduction Agency of the United States of America Department of Defense and the National Nuclear Center of the Republic of Kazakhstan Ministry of Energy for security and sustainment capabilities at the former Semipalatinsk Test Site territory.