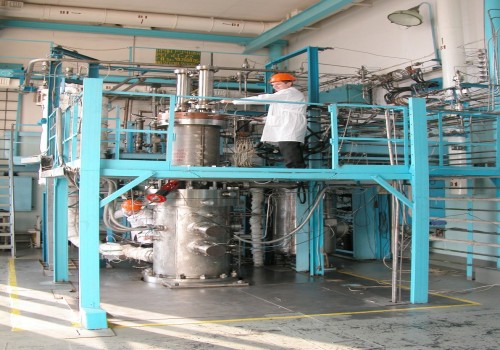 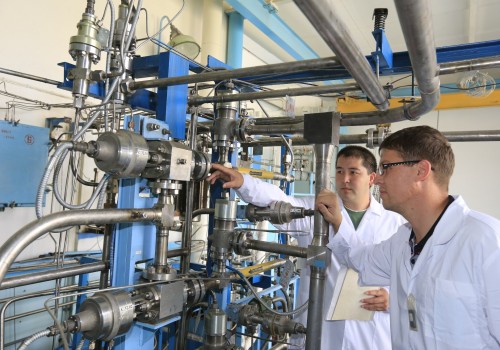 Experimental research program (in-pile and out-of-pile reactor tests) regarding the safety issues of nuclear power aimed at finding solutions towards mitigation of SFR core materials melting severe accidents consequences is being implemented within the collaborative project EAGLE-3 (JAEA, Japan) in the National Nuclear Center of RK.

In 2017, the final series’ experiment on optimization of sodium set-point device design was carried out at the out-of-pile reactor EAGLE test-bench. The first experiment from series of testing regarding the study of severe accident final stage for the fast reactor with melt migration to sodium lower plenum was carried out. As a result of the experiment performed, melt distribution upon the disk surface simulating bottom of melt receiving tank was determined.

In 2018, within the framework of EAGLE-3 project, out-of-pile reactor tests aimed at study of severe accident final stage for the fast reactor with melting migration to sodium lower plenum are continued. Model FA melting reactor experiment with the following melt migration upon the tube simulating control rod guide tube in details is scheduled to be carried out.

Reference:  Since 1998, Kazakhstan and Japan have been performing joint research on EAGLE project (Experimental Acquisition of Generalized Logic to Eliminate re-criticalities), focusing on Japanese SFR (Sodium Fast Reactor) safety substantiation. This reactor is aimed for the performance of wide range of tasks in the near future of nuclear energy sector.

The options of reactor modification are divided on three notional groups with the capacity from 50 to 1500 MW. Reactor uses sodium as coolant under its pressure in the core close to the atmospheric one. Sodium output temperature from the core (500-550 °С) has a large reserve till the boiling. A various types of heat energy converters to the mechanical: in the water of high pressure, nitrogen and carbon dioxide were considered.

Within the SFR reactor project, the best practices and achievements of the previous developments as of Japan and other countries are used. One of the innovative feature is the application of molten core materials output system capable to prevent re-criticality within the emergency situation. For this purpose, special channels providing the routes for melt migration beyond the core are installed inside each FA of FAIDUS type (Fuel Assembly In-Duct Structure). The removal of the core melt, even partial reduces probable formation of compact basins with melt of critical configuration.  Besides, during the further accident progression, the newly forming melt mass could be overflown upon the reactor control rod tubes.

Generalizing the aforesaid, it should be noted that EAGLE project is designed to study the possibility of controlled core materials melt migration upon the above-mentioned channels.