National Nuclear Center of RK successfully carried out the loading of two WCTC experimental channels with low-enriched fuel into the core of IVG1.M reactor 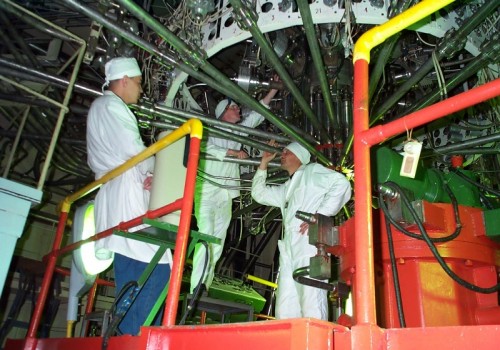 The National Nuclear Center of RK under support of the National Laboratories of USA is being implemented the project on research reactors conversion – IVG.1M and IGR reactors fuel enrichment reduction from 90% to 19.75% upon U-235.

In 2016, the realization of the most important preparatory stages of conversion – study of low-enriched fuel for IVG.1M reactor was launched.

In late September – early October 2016, 2 experimental WCTC channels with low-enriched fuel was loaded into the core of IVG.1M reactor with following testing of critical condition of the reactor and determination of reactivity margin change because of experimental channels availability in the core.

Durability tests of WCTC channels with low-enriched fuel are planning to be carried out in the second quarter of 2017, moreover technical solutions allowing to reduce testing time (from two to three years) without compromising its quality are being developed.

In 2017, comprehensive test of experimental low-enriched fuel and internal reflector elements of IGR rector will also be started.

The study of new materials characteristics will be carried out as at out-of-pile reactor facilities so at IGR and WWR-K research reactors.

The last (WWR-K) is being operated by RSE “Institute of Nuclear Physics” and represents the first Kazakhstan Research Reactor in respect of which the project of its conversion to low-enriched fuel have been already implemented.

It is planned that testing of specially created in Russian Federation pilot samples of fuel with low-enriched uranium intended for IGR and IVG.1M reactors will be completed no later than 2019, after that comprehensive study of tested fuel will be conducted and the conclusion of possible fuel use in NNC reactors will be formulated.