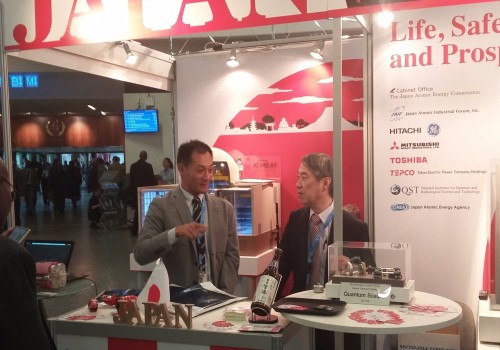 The National Nuclear Center of RK has conducted series of meetings within the framework of the 61st General Conference of IAEA. Thus, a meeting with Japanese colleagues from JAEA was held on September 20.

In the course of negotiations successful performance of joint operations under EAGLE-3 project was noticed that have been carrying out since 2015. Under the current project the first series of out-of-pile experiments at EAGLE-3 bench were completed, and in July 2017 physical studies on model of ID-5 reactor  experimental device were completed.

Cooperation extension issues were also discussed. In particular, NNC RK proposes its participation in operations associated with accident consequences elimination at Fukushima 1 NPP both on decommissioning of NPP and rehabilitation of contaminated territories after the accident.

Japanese colleagues expressed their interest for experience exchange in area of radioecology since NNC RK achieved high results in this sphere: unique experience of researches is accumulated, a serious reserve is available in study of radionuclides migration from underground and surface waters, a unique method is developed on pedestrian gamma-spectrometry survey for express-assessment on the character of radioactive contamination of the territory.

As part of the agreement with JAEA a Seminar on radioecological issues will be held within the period from November 1 till November 3, 2017 in Kurchatov (Kazakhstan) where Japanese and Kazakhstani specialists will exchange their experience.