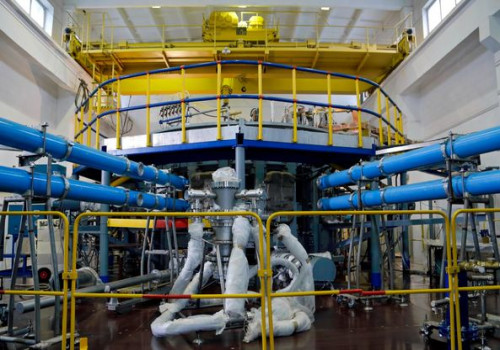 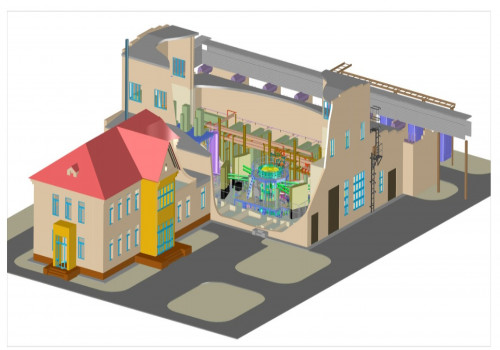 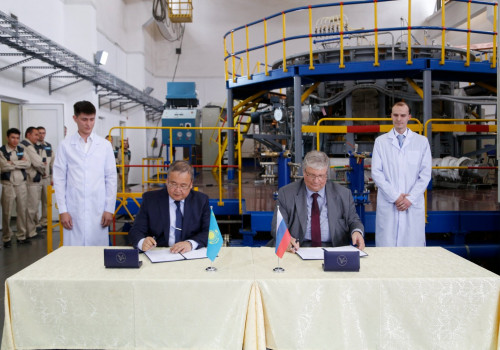 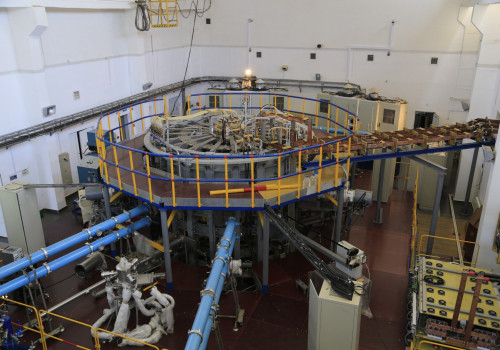 Kazakhstan Material Testing Tokamak KTM has been constructed according to the Resolution of the RK Government in support of the International Program on experimental thermonuclear reactor ITER construction, modern science and technology development in the Republic of Kazakhstan, highly qualified scientific and engineering personnel training. Its main task is to study prospective materials on their interaction with high temperature plasma, to create critical (essential) components and associated parts for the future thermonuclear reactors, including ITER.

KTM – is the only mega ampere facility in the world (plasma current Ip=0.75 МА) designed for testing of materials and technologies in standard and emergency (plasma disruption mode) work conditions at thermonuclear reactors with aspect ratio А=2, that enables to study plasma physics and its confinement within bordering limits between spherical (А<2) and classic (A>2) tokamaks.

The unique KTM project will make materials testing possible under thermal loads up to 20 MW/sq. m, that corresponds to ITER thermal load parameters. Besides, KTM original design solutions enable to solve many different tasks of both plasma-physical and technical-engineering nature. The principal stages of the KTM project implementation are as follows:

2003–2007 – complex designing and KTM facility construction, reconstruction of buildings and structures, assembling of power substations and EPL, start of the main technological and engineering systems installation;

2016–2018 – completion of the construction-assembling operations remained, start of the start-up operations;

2019 – KTM complex transfer to the balance of RSE NNC RK as the object of incompleted construction, completion of start-up operations and commissioning.

On June 9, 2017, the first stage of physical start-up was successfully realized expecting the opening of the International Exhibition EXPO-2017 “Future Energy”, and on November 20, 2019 plasma discharge, meeting all requirements of the second and final stages of physical start-up, was obtained. At this stage KTM tokamak operation capability was demonstrated with plasma obtaining in ohmic mode on reduced parameters with participation of all regular technological systems of the complex. Specialists of NNC RK and Russian Federation took part in the work. Implementation of the project on bench complex Kazakhstan material testing tokamak KTM construction has allowed the Republic of Kazakhstan to enter the top 10 countries, possessing advanced research thermonuclear facilities in similar scale.

Tokamak KTM is in high demand by the international scientific community due to its unique technical characteristics, which have no analogues in the world today.

At present, researches have been conducted as part of implementation of the budgetary STP RK “Scientific and Technical Provision of Experimental Researches on Kazakhstan Material Testing Tokamak KTM”, aimed at improving the plasma discharge parameters at KTM facility in order to reach design (nominal) modes in operation, develop and promote controlled thermonuclear fusion technologies, basic science in area of plasma physics, material science, as well as corresponding applied technologies in support of the future thermonuclear reactors construction and operation.

Work at KTM tokamak has been realized in close cooperation with CIS countries (in particular, with the Russian Federation) as part of CIS Intergovernmental Agreement on the joint use of the KTM tokamak, signed at the meeting of the Council of Heads of Governments on May 26, 2017 in Kazan by six countries: Russian, the Republic of Kazakhstan, Belarus, Armenia, Kyrgyzstan and Tajikistan.

The important event was held on June 11, 2017 in Astana, when the agreement for cooperation was signed between the National Nuclear Center of the Republic of Kazakhstan and the ITER International Organization. Two commercial contracts have been already implemented as part of the above mentioned agreement as well as specific testing of materials and equipment, used during ITER construction, has been carried out on the basis of RSE NNC RK. Now we are on the stage of discussion and preparation for the next commercial contract.