Congratulations on the National Award! 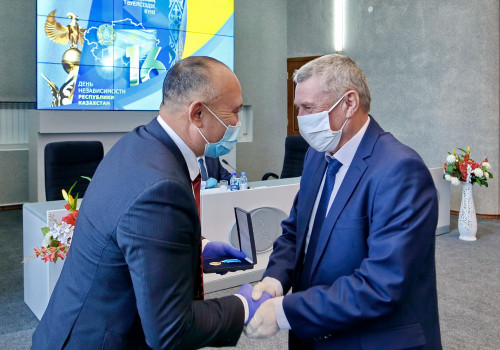 Petr Nikolayevich Kiryushkin, Chief Engineer of the "Institute of Radiation Safety and Ecology" RSE NNC RK was awarded the Medal "Eren enbegy ushin" for significant contribution to solution of tasks of the National Nuclear Center of RK (RSE NNC RK), exemplary performance of his official duties and high professionalism. The awarding procedure was held expecting the Independence Day of the Republic of Kazakhstan.

Petr Nikolayevich has been working in the RSE NNC RK since 1997. Utility systems of the enterprise were continuously upgraded under his direct supervision. Participated in implementation of the unique projects on radiaiton hazardous situations elimination at the territory of the former Irtysh Chemical and Metallurgical Plant, transportation and storage of nuclear fuel from BN-350 reactor and so on.

We sincerely congratulate Petr Nikolayevich and wish him success, health and new achievements!