On the 120th Anniversary of Dollezhal’s Birth 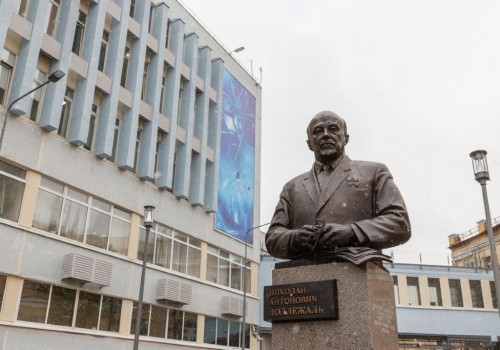 A monument to the prominent scientist, Professor Nikolay Antonovich Dollezhal is built at the same name square, in front of the Scientific Research and Design Institute of Energy Technologies (NIKIET), Moscow in honor of Jubilee date.

Professor N.A. Dollezhal, Soviet scientist-power engineer, designer of nuclear reactors headed a “Special Insititute” in 1952, later it was renamed as SRI-8 (today it is named as NIKIET), established to desing all types of reactor, and he headed the institute for 34 years.

The construction of the first Soviet production reactors and the first nuclear power plant in the world, nuclear power facility for the first national nuclear submarine, nuclear rocket engines, research reactors and many others is associated with the name of Nikolay Antonovich. In 1961 Dollezhal established “nuclear” chair “Power machines and facilities” in Moscow State Technical University and headed it for 25 years.

Construction of IVG.1M unique reactor in the 1960-s of the last century is also connected with Dollezhal name, that is located at the former Semipalatinsk Test Site. Reactor design was developed by NIKIET, a reliable partner of the National Nuclear Center of RK. In particular, joint project is currently under implementation on simulated fuel elements testing at IGR reactor, with fresh SNUP-fuel for Brest-OD-300 innovative reactor facility with the rapid increase of power.