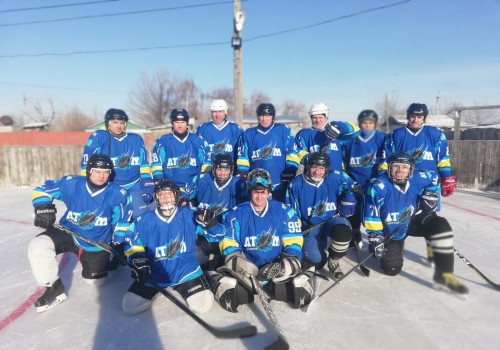 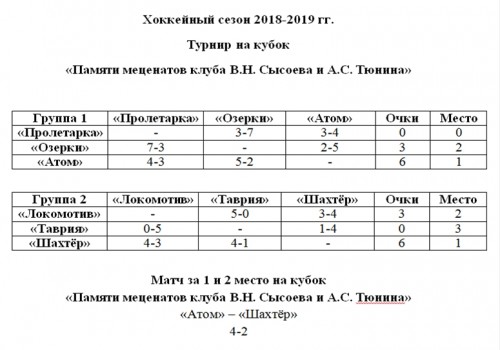 Nowadays, amateur ice hockey teams are available in almost every city in Kazakhstan. Kurchatov town also has its own “Atom” hockey team which make their fans happy with unfailing regularity.

On January 13, 2019, one of the four annual amateur tournaments on ice hockey was held with regular participation of players from Kurchatov team. The first in the season 2018-2019 opened tournament took place in Ozerki settlement, dedicated to the memory of V.N. Sysoyev and A.S. Tyunin club patrons.

The status of opened competitions allowed to fight for the cup not only to representatives of the city teams, but also to hockey teams from East Kazakhstan.

All six teams were divided into two groups by drawing lots. According to the results of all the matches played, the teams settled at the tournament table by the sum of points scored. The game of all teams was tense and unpredictable, but unfortunately, not without injuries. "Atom" and "Shakhtyor" teams became the best among all other groups, and therefore they participated in the main face-off match for the tournament cup.

Following the results of final game with a score of 4:2, our Kurchatov hockey players from “Atom” team won the honourable cup. “Silver” is on the account of amateur sportsmen of “Shakhtyor” team from Borodulikha district.
In addition to the cup itself, the panel of judgees identified the best players of the past tournament in various nominations. So, the title of "Best Goalkeeper" of the tournament was deservedly won by Vladimir Sergeyev, ice hockey team player from Kurchatov town.

The Cup - main trophy of the tournament - will spend a year in our city and will be presented for the prize draw in the next season.

We congratulate “Atom” hockey club with deserved victory and wish them to improve the result already achieved in the upcoming ice season!

Link to the video of the past tournament: https://www.youtube.com/watch?v=NYLobRTYuAE